Serifos is an Aegean Sea island belonging to Cyclades. The capital is Chora (or Serifos), which is built at an altitude of 200 m. The port is called Livadi whereas other large settlements are Koutalas, Megalo Livadi and Kentarhos. The surface of Serifos is estimated at 75 207 square kilometers and has a coastline of 83 km. In the 2011 census the island’s population was 1,420 people.

The island flourished during the late 19th – early 20th century, when they settled mining companies exploited its rich subsoil. But later the mines were abandoned because mining was considered to be unprofitable, and several villages were devastated. Since ancient times it is known as a infertile island. Its highest peak is Tourlos with an altitude of 585 m. The subsoil has deposits of hematite (Fe2O3) and magnetite (Fe3O4) formed by contact metamorphism within the limits of a granitic intrusion and skarn type deposits, rich in various minerals. In the southwest region of the island, in Koundouro position there are copper deposits while in the position with the eloquent name Skouries there are copper ore smelting residues. Copper slags in that position above the adjacent bay of Avessalos, stand there as true witnesses of metallurgical activities from prehistory to late antiquity. 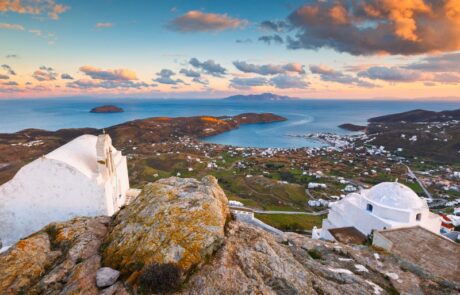 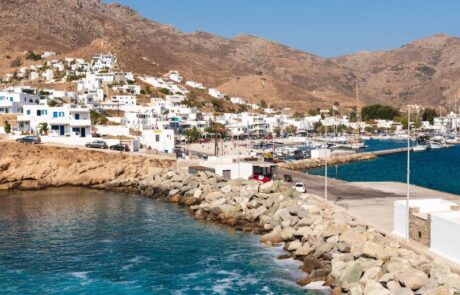 You can travel to Serifos from the port of Piraeus with the C / P / F “Dionysios Solomos”. Click the button below to see all available Zante Ferries itineraries or contact us for any clarification you need, in order to better organize your trip.