Santorini, Thira or Strogili (older name) is an island located in the southern Aegean Sea, at the island complex of Cyclades, south of Ios and west of Anafi. Its distance from Piraeus is 128 nautical miles and 63 nautical miles from Crete.The Athinios,the largest port of the island, has been created in the homonym cove. Its surface is 76.19 square kilometers. Today Santorini is one of the most famous tourist centers around the world.It is known for its volcano. The last volcanic activity was in 1950.Parts of the volcano are: Nea Kameni (1707-1711 AD), Palea Kameni (46-47 AD), the submarine volcano Columbo (active) ( 1650 AD), the Christiana islands.

Santorini belongs to the Aegean volcanic arc and it is characterized active volcano together with Methana,Milos and Nisyros. Santorini as well as the islands of Thirassia and Aspronisi are remnants of the volcanic island Strogili. Strogili was a volcanic cone. Its central part was blown up along with the volcano’s crater by the Minoan eruption which took place in 1613 BC and resulted in the creation of what we now call the caldera of Santorini and the destruction of the prehistoric culture of the island. 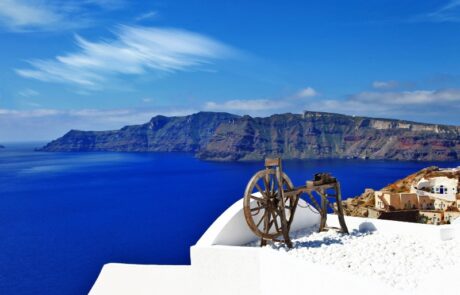 You can travel to Santorini from the port of Piraeus with the C / P / F “Dionysios Solomos”. Click the button below to see all available Zante Ferries itineraries or contact us for any clarification you need, in order to better organize your trip.